On June 29 and 30, Amma conducted programs in Atlanta for the first time.  At one point, my daughter Chaitanya asked if I wanted to visit Martin Luther King, Jr.’s church and the other buildings at the MLK National Historical Site.  I jumped at the opportunity. We went during the short break between Amma’s morning and evening programs.  Our plan was to see as much as we could this year, and view the rest the next time we go to Atlanta. The first place we visited was Ebenezer Baptist church.  Starting in 1960, Martin Luther King, Jr. co-pastored that church, along with his father.  As we sat in the pews, a recording of one of Dr. King’s speeches filled the air.  I closed my eyes and imagined myself being present at the time the speech was first given.  I would have been content to stay sitting there for hours. When I looked around, I noticed many people were taking photographs.  I resisted doing the same, but in time changed my mind; I wanted to be able to share this memorable experience with others. 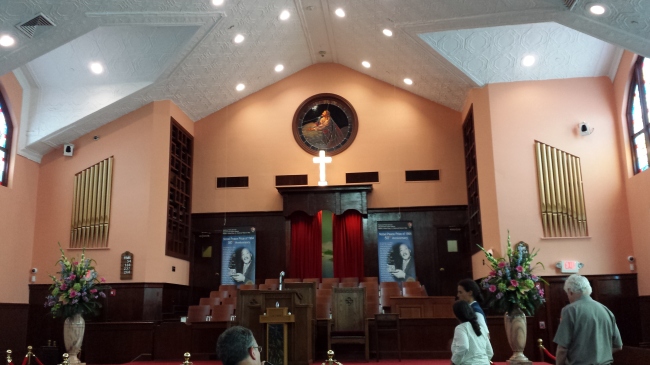 At King Hall there were many exhibits about the lives of Dr. King and his wife Coretta Scott King.  In addition, the hall contined rooms that were tributes to Rosa Parks and Mahatma Gandhi.

In Rosa Parks’ room, there were many pictures and mementos.  I was particularly drawn to a quilt that was hanging on the wall. 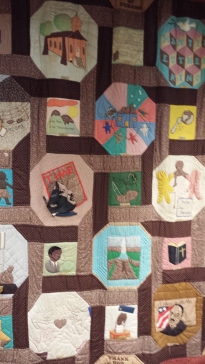 Among the items in Mahatma Gandhi’s room were one of his walking sticks, a pair of sandals, a portable spinning wheel, and framed quotes.  I was not aware that Dr. King had so much respect for Mahatma Gandhi.  I also didn’t know he had traveled to India.  Dr.  King once said: “To other countries I may go as a tourist, to India I come as a pilgrim.”

Next we went to the place where Dr. and Coretta King’s bodies are interred.  It was beautiful and felt like very sacred space to me.

We had planned to visit the home where Dr. King was born, but once there we discovered they only let visitors in twice a day and you have to get tickets ahead of time.  We did appreciate having the opportunity to see his house and stand on his porch, but will have to wait for a future visit to go inside. 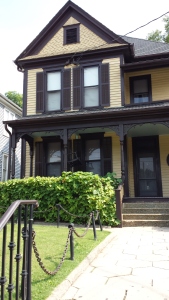 We spent the last half hour of our visit at the National Park Visitor Center.  Below you will see parts of the huge mural that is across from the entrance to that building.  I wish I had had time to look carefully at all that was contained in that artwork. Inside the Center there were enough exhibits to keep us busy for most of a day.  Several of the displays were interactive.  An example is in the picture below, where visitors were able to walk alongside statues of the civil rights marchers.  We will definitely spend more time at this Center in the future.

The night before our visit, I read about the National Historical Site in the tourist book in my hotel.  I found a story that really surprised me.  In preparation for writing this post, I learned more about it. When Martin Luther King, Jr. was awarded the Nobel Peace Prize, not everyone supported the decision.  The first ever integrated dinner in Atlanta was planned to celebrate it.  Black business owners signed up to attend but the white business establishment wanted nothing to do with it.  J. Paul Austin, chairman and CEO of Coca-Cola, and Mayor Ivan Allen brought some of the prominent white business leaders together.  The message Paul Austin gave them was:

“It is embarrassing for Coca-Cola to be located in a city that refuses to honor its Nobel Prize winner.  We are an international business.  The Coca-Cola Co. does not need Atlanta.  You all need to decide whether Atlanta needs the Coca-Cola Co.”

The event sold out within two hours!

During our time at the Site, I experienced deep emotions and many memories.  That era had affected me and my life decisions profoundly.  There is no doubt that Martin Luther King, Jr. contributed significantly to making me the person I am today. I feel blessed to have visited Dr. King’s memorial site and look forward to returning to it in the future.