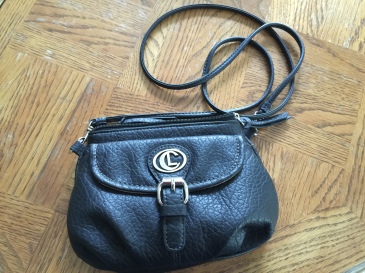 I intentionally carry a small purse (7 ½ x 5 ½ x 2 ½ inches) and I keep very few things in it.  I believe that having a small purse increases the likelihood that I will be able to find items when I look for them.

Despite that precaution, I find myself constantly searching for things. I often say that if I could get back all of the time I have spent looking for my keys, it would add years to my life.

Sometimes I lose items due to not paying attention to where I put them. At other times though, the circumstances are more bizarre.

A few weeks ago, I bought a clock at my local Rite Aid store.  I was aware at the time that it might not work out, so I took care to keep the receipt.  The next day, I decided to return the clock.  I looked through my purse, the place where I was sure I had put it, and it wasn’t there.

I mentally retraced every move I made after having left Rite Aid.  I remembered that I had carried the unbagged clock  to the QFC next door. Had I kept the receipt in my hand instead of putting it in my purse?  Had I put the clock and the receipt in the grocery cart and accidentally left the receipt in the cart?  That didn’t seem right, but at least it was a reasonable explanation.

For two days, I searched everywhere for the receipt.  I looked through my purse over and over again.  I finally accepted the fact that I wasn’t going to find it.  A day or two after that, I looked across the table and saw this:

It was the receipt for the clock! There was NO way that receipt had been hanging out of my purse all that time.  And I live alone so it was not reasonable to think that someone else had placed it there.

Hinduism has a word called leela.  It means God’s play.  The whole thing sure felt like a leela to me.  God’s play would have a purpose though.  So if this was a leela what was the purpose?  Well it had given me the opportunity to practice being calm in all circumstances; trust the process of life; remember the importance of being mindful; be persistent in going after what I want, yet know when it is time to let go; and remember that everything happens for a reason.

Decades ago, I had many experiences of losing things and then finding them days, weeks, or months later… in plain sight.  So often the items were in places I had looked many times. I began to wonder if there was something physically wrong with me.  Did I have a dissociative disorder (i.e. in those days the extreme version was called Multiple Personality Disorder)?  Did I have Alzheimers? Did I have some other medical problem?  None of those explanations seemed right but I went to a psychologist anyway.  He reassured me that there was nothing wrong with me and said he believed that my unconscious mind had found a way to get my attention FAST.  There was no doubt about that; I hated having my memory challenged. 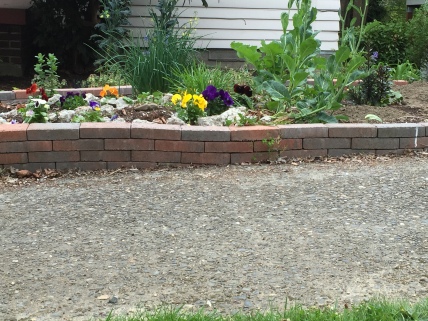 This morning, as I was contemplating writing this post, it happened again.  I have a brick wall in my garden that I build two years ago out of loose bricks.  My garden has gophers and their tunnels cause the wall to slump.  Therefore, I need to rebuild parts of it each spring.

I decided I would start that rebuilding process this morning.  I’ve been having back problems the last few months so I knew I would have to do it slowly, a small section at a time.  I finished what I considered to be a reasonable amount of the work…. and then decided I would do just a little more.  I reached for my trowel and the level, and they were nowhere to be found! 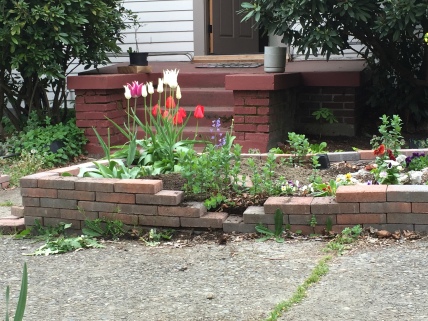 I hadn’t moved from where I was working.  I searched for the tools for a while and then gave up.  Clearly I shouldn’t be doing any more; I had done all my back could tolerate. I also decided there was no point in continuing to look for the tools.  I went back into the house to rest my back.

When I took the garbage outside, two hours later, I found the trowel and level in another part of the garden.  When I saw them, I remembered that earlier I had seen some bricks that were not straight in that part of the garden and had walked over there to straighten them.  I had set the tools down at that time.

I imagine there are rational explanations for everything I lose, although I often don’t have a clue what it is.  I do believe things happens for a reason and those reasons are for the good.  I appreciate any process that gives me opportunity to learn and/or protects me from me.

17 thoughts on “Challenging My Memory”