I grew bee balm for the first time two years ago. That year there were almost no bees in my garden and I never saw any in the bee balm. Last year, I accidentally planted something where the bee balm would come up, so it never had a chance to grow. This year I took care to see that the plant had plenty of space.

Before long, there were more blooms than there have ever been. But where were the bees? There were lots of bumblebees in the garden and some honey bees but none of them came near the bee balm. 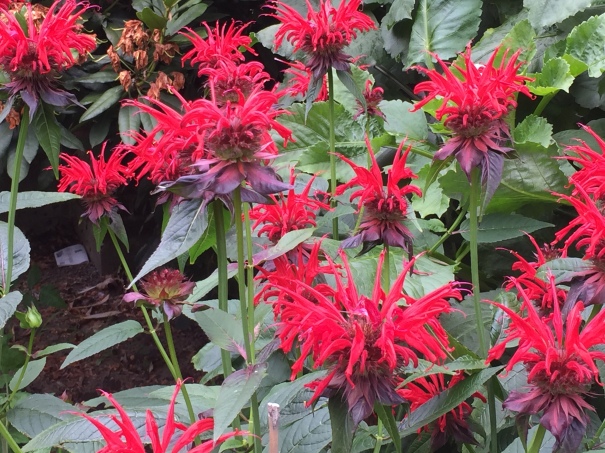 Then one day, I saw a single honey bee collecting nectar.

That bee stayed there for quite a while. I have never seen another one.

Earlier this week, I saw glimpses of a hummingbird’s wings, on the far side of the bee balm, three different times. Yesterday was the first time this year that I was able to see one of the birds fully.

In the evening, I discovered if I looked out the front window of my living room, I could view the plant from above.

Today, I looked out the window frequently to see if I would spot a hummingbird.  And I did!  It visited several different times and I was able to take pictures of it. (In the following photos, the hummingbird is near the center of the picture.) 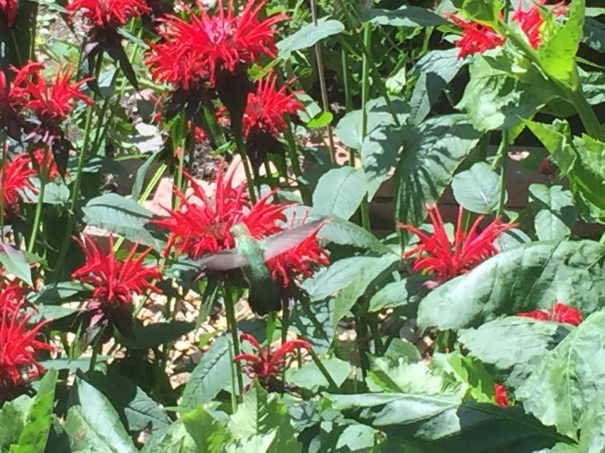 I hope more bees and hummingbirds will visit the bee balm, but even if they don’t, I believe I will continue to feel as happy and satisfied as I do now.