In April, my neighbor John and I started doing some clearing of invasive plants, mainly ivy and blackberry vines, in the Greenbelt site that is to the north of ours. Members of Earth Corps had cleared parts of that site 10-15 years ago. They had also planted evergreen trees, native shrubs and ground covers. I know that Susan, who like me is a Green Seattle Partnership Forest Steward worked in that area with some elementary school students several years ago, but for the most part it has gone wild. I’ve been eager to delve into removing the invasive plants from that land for some time, but know that clearing and maintaining our main site needs to stay the priority for our work parties and for work John and/or I did on our own.

A few weeks ago, I decided to spend two hours on two different days working along 25th Avenue S north of the Hanford Stairs, which is on the west border of the Greenbelt site that has been calling me. Once the area along the street was cleared, I/we would clear the land along the Hanford Stairs and eventually work deeper in the forest. We could work on this project from time to time and still keep our main Greenbelt site our top priority.

The small area I decided to tackle that day was dense with snowberry and Indian plum shrubs, a maple tree and numerous evergreen trees. Blackberry vines ran through it all. The shrubs were so close together that it was impossible to walk through them. Experiencing the density of the native shrubs was a good reminder that almost everything we are planting in the other site will get big and I need to keep that in mind when making planting decisions.

I couldn’t figure out how to reach the blackberry roots so that I could dig out the root balls. The best I could do was reach into the foliage and cut back the stalks.

The first picture below shows what the shrubs along the street looked like when I began working that day. 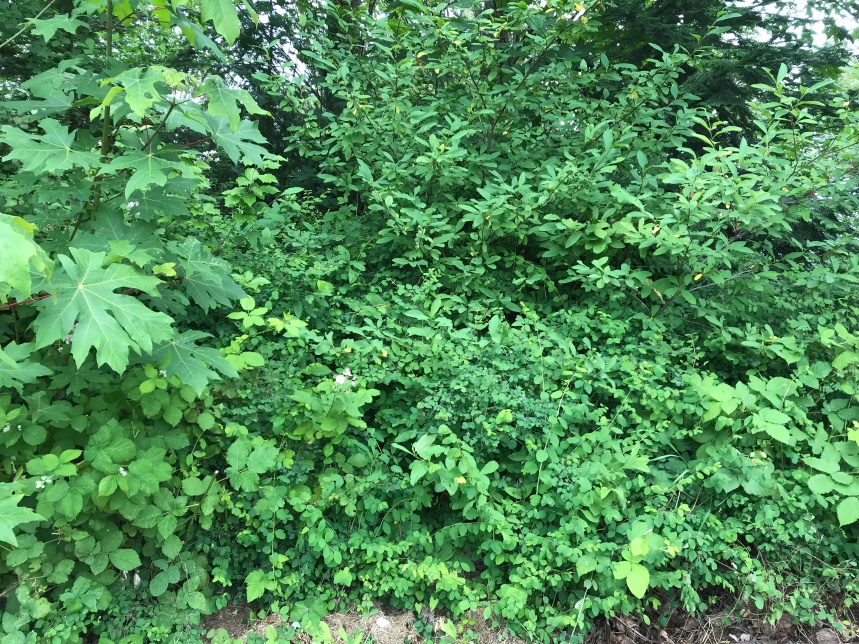 The next one is of the first pile of blackberry stalks I removed.  By the time I took that photograph, I had already partially cleared the ground to the right of the cut stalks. You can get a sense what the ground looked like when I started by looking to the left of the pile.

At one point, I noticed that the snowberry plants had many tiny pink blossoms on them. 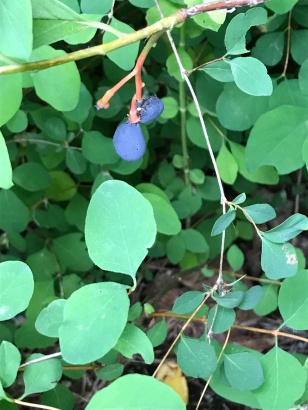 As I was preparing to stop my work on the second day, I heard lots of buzzing. When I took the time to investigate the source of the sound, I saw honey bees, bumble bees and mason bees flitting from one pink snowberry blossom to another. I loved seeing that wildlife has returned to this site and look forward to the plants in our site getting big enough to attract the bees too.

Once I had cleared the land in front of the shrubs, and cut back as many of the blackberry stalks as I could reach, I laid burlap bags on the ground and scattered wood chip mulch over them. The burlap and mulch will help reduce weed growth and hold in moisture.

This is what the section looked like when I stopped working on the second day.

The before and after photos below show the increased space that resulted from removing the blackberry stalks. I hope to learn how to get to and dig out the roots balls. I also need to find out if there are other things I should be doing to decrease the density of the shrubs.

At one point, I saw an evergreen tree covered by blackberry vines deep in the mass of shrubs. I tried to get to it from all sides but never found a way into the thicket that surrounded it. I look forward to being able to free that tree from the blackberries. Hopefully that will be in the near future.

[I don’t think that particular tree can be seen in the following photo, but the photo may give you a sense of why I couldn’t get to it.]

As I was trying to find my way to the tree, I saw a shrub with beautiful white flowers. I thought it was stunning. I used my phone’s Plant Net app to see if I could find out what it type of plant it was. I was excited to discover it was an oceanspray shrub. In February we planted 10 oceanspray shrubs in our site. I loved having had a glimpse of what they will eventually look like. 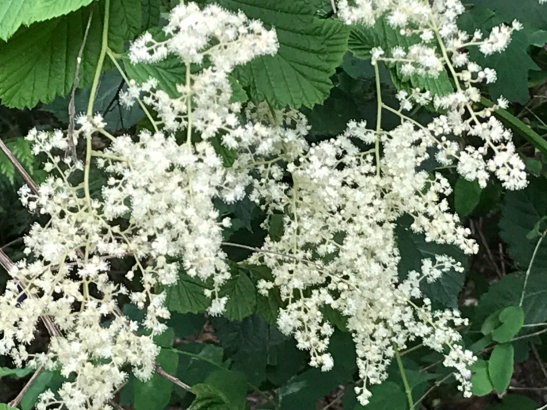 The strip of land I worked on was only 15 to 20 feet long. So much more needs to be done even in this small section of the second Greenbelt site. Below are photos taken of an area adjacent to the one I described in this post. It is another 15 foot segment. 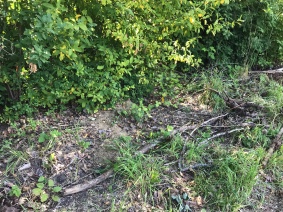 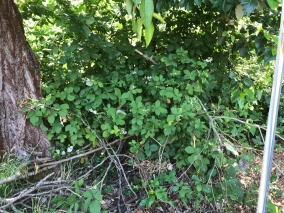 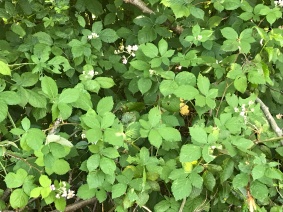 The strip along 25th Avenue S is 150-200 feet long. The whole site is 1.89 acres. I know it is important for me to focus on the moment rather than looking at the immensity of the whole. In other words, I will remember I need to move forward “One Step at a Time.”

One thought on “One Step at a Time”