Sreejit’s direction for this week’s Dungeon Prompt is to “pick a quote from a famous person that best describes your life’s journey. The quote can be about the person that you’ve been up until now or the person that you are trying to become. Tell us about it. Use the quote as a springboard for letting us get a better glimpse of who you are.”

While my brother Bill would not have considered himself to be a famous person, nor would he be considered a famous person by the world, it was in a section of his journal that I found the quote that fits the most for me. Bill died at the age of 39. His words reflect some of the values that I held early in my life and during the last five to eight years have again become a major focus. The quote:

I am very sad that people seem to see so little of the world around them. I can’t walk outside without seeing the beauty of our created world, from the rainbow in a line of earthworm slime, to another visible ring on Jupiter. We have been given this magnificent world to study and enjoy in limitless detail at any level, microscopic to cosmic. Even though I have enough things to interest me another 10 lifetimes, I must take solace in knowing that, at least compared to others, I’ve had much more than my share even in half a life time.   (William John Smith 1953-1992)

When I was a child, I was fascinated by butterflies. I am mortified now to think of the butterfly collection I had then. I caught butterflies with a net, used some chloroform type liquid to kill them and then mounted them on a display board. At the same time I feel grief about that, I recognize that we had a different way of thinking in the 50’s and that I had made the display out of my love and appreciation for butterflies.

I have memories of making forts in the forest when I was young, although I don’t remember where that was. It is possible that the “forest” was just my back yard, but I don’t think so. Being an army brat, we moved every three years. I have almost no memory of the places I lived or events that happened there.

I do remember an incident from the 4th grade when we were living in Germany. I had crawled under the schoolyard fence during recess so that I could collect snails in a box. When I came back into the schoolyard at the end of recess, I looked up the hill only to see my teacher and my mother, who also taught at the school, standing behind a railing watching me. I have no memory of what came next but I do remember getting “caught in the act”.

I know there was also a time during my school years when I had a microscope and loved using it. I enjoyed studying the biological sciences when I was working on my Bachelors of Science in Nursing degree from 1966 to 1970.

When Al and I first married, we bought a house three miles south of the center of Seattle. To me, it it felt like having a farm in the middle of the city. There was a pantry in the basement where I could store canned fruits and the house had an outdoor clothesline that operated by a pulley, going from the porch to a nearby tree. There were concord grape vines growing in the yard and I made grape jelly from the grapes. We purchased the lot behind our house and made a garden there.

Over the years, I stopped gardening. There were a few times I planted some vegetables but the trees grew so high that the backyard got very little sunlight. Besides, my life was filled with child-rearing, going to school and working multiple jobs. I didn’t start gardening again until Amma began to encourage us to grow organic vegetables at home. That was probably around 2010.

Over the next few years, I removed part of the grass from my front yard, so I could build a garden that would get some sun. I took out all of the grass three years ago. It is a small area, but now the whole front yard is a garden. 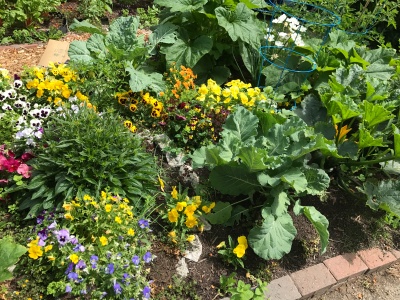 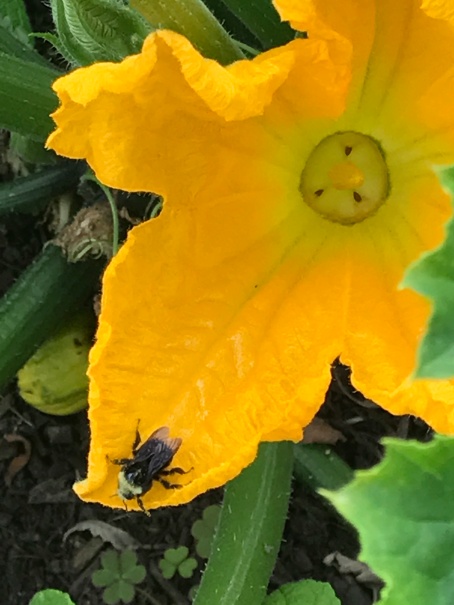 Next, I developed an interest in vermi-composting, a process by which red wiggler worms transform food scraps into high quality compost. The worms became my pets. I still love my worms. Other people have to find dog and cat sitters. When I go to India I have to find a worm sitter! 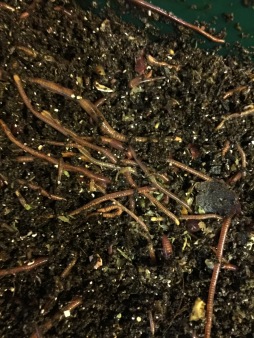 I shared photos of flowers… 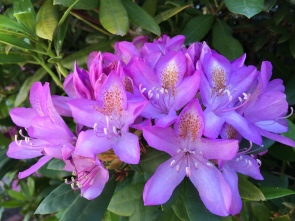 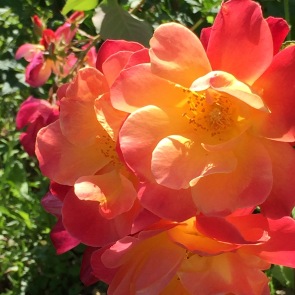 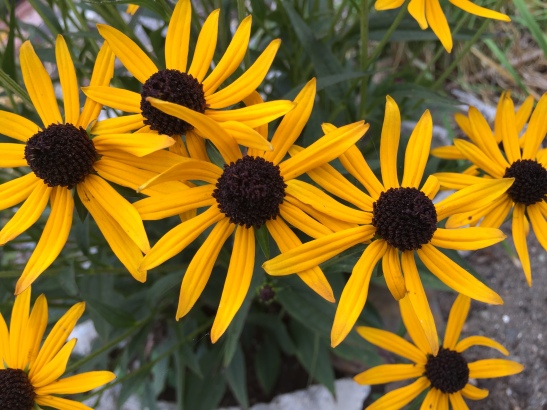 …  wrote posts about experiences with snails (Photo Journal of a Snail’s Adventure), moles (Attitude is the Key), slugs (Seeking to Live in Harmony with Slugs) and ants (Wait, Watch and Wonder).

Soon I wanted to know more about these garden “pests.” I started reading about them and was amazed by what I learned. I shared that information in my blog posts. (The Symbiotic Relationship Between Ants and Aphids) (Slugs Underground) (The Fascinating Fruit Fly)

Several years ago, I remembered my fascination with my childhood microscope. I decided I would buy another one “someday.” One morning it occurred to me that I could add microscopic photography to my nature posts. I immediately purchased a microscope and adapter that connected  it to my iPhone camera. I started taking and sharing microscopic photos. 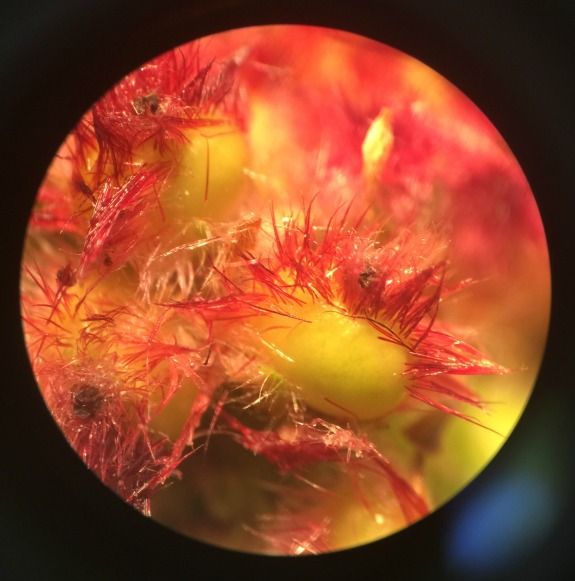 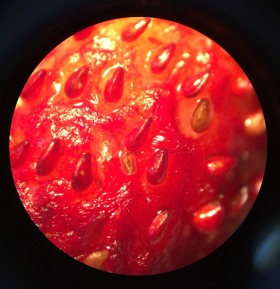 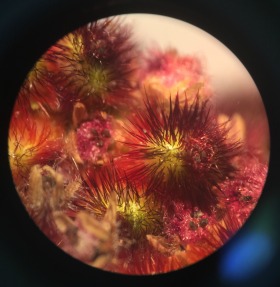 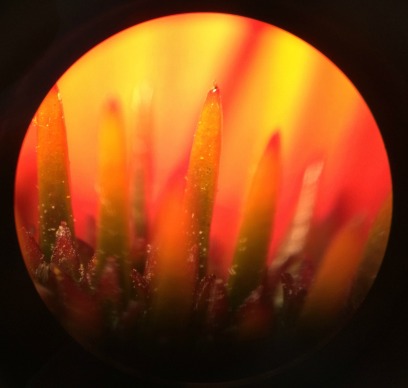 In September of 2016, I woke up one morning thinking that I was not willing to watch one more tree die in the area of Seattle’s Greenbelt that is near my house. I took my shears and started cutting down the blackberry and ivy vines that had covered that land for 30-50 years. That day was the impetus for starting the GreenFriends Greenbelt Restoration Project that is now my passion.

Our GreenFriends group, aided by a neighbor and students from the Introduction to Environmental Science class at the University, the Green Seattle Partnership and the Seattle Parks Department began to clear the land. Once the invasive vines were removed, we dug out blackberry root balls, covered the cleared land with burlap to hold back weed growth and then put dried blackberry canes and other debris on top of the burlap. The debris and the burlap will disintegrate and enrich the soil. This fall we will plant 400 trees, shrubs and ground covers and will continue to plant until the land is once again a healthy forest.

Every day I work in the Greenbelt is filled with seeing wonders of nature, whether it be a fern, flower or tree whose will to live has been so strong that it has defied being buried under invasive plants for decades or whether it is watching the birds, butterflies and other creatures that are returning to the land. One day, a mole stuck its head out of the ground and looked at my friend Ananya who was sitting nearby.

My passion for nature that began as a child, went into the recesses of my mind for decades, is now back in full force. I feel grateful and blessed. I so appreciate that Bill’s words helped keep that part of me alive during the intervening  years. 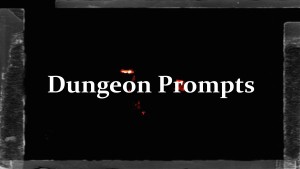 Written for Dungeon Prompts: Defined by a Quote

To read more of Bill’s life philosophy go to The Truth I Live By.

The photo at the top of this post is from pixabay.com.

11 thoughts on “The Wonders of Nature”