I am resistant to doing spiritual practices (sadhana) other than bhajans (singing) and since sound is bothering my nervous system I can’t even do that.

I decided four or five months ago that I would start praying before meals. That is a practice that I am very lazy about doing. And I would like to change that. I made a new rule- if any food touched my mouth before I chanted the meal prayer, I had to do the chant three times instead of once.

Amma has us chant Bhagavad Gita 4:24 as the meal prayer:

I started that practice sometime before my daughter arrived from india. When she got here, she decided to join me in the endeavor. At that point, she would remind me to pray, since she didn’t want to chant it three times.

After some time, she realized that we frequently weren’t eating at the same time. She changed her mind about participating at all. At that point, she also quit reminding me.

As time went by, I found myself often chanting it 9 times at night! I obviously haven’t integrated this practice yet. At least this week, there have been several times I have remembered to chant the prayer at mealtime… before I ate. Today, I had visitors during lunch so I had them pray with me even though they weren’t eating!

I am staying, temporarily, in a senior living facility in Woodinville. I really like it here and it is wonderful to only have to navigate one room instead of a multi-story house. (I’m in a studio apartment now.)

More than twenty people live in my wing of the facility. Most I have never seen. But there is one couple that I have passed in the hall so many times. I see them when I’m going to pick up my to-go dinner and they are coming back from their dinner in the dining room. (Both options, and more, are available to everyone.) We often come out of our rooms and enter the hallway at the same time. Now, we laugh whenever that happens.

It reminds me of being in Amritapuri. There are many people there I never see. And there are others that it feels like are around every corner I turn. Those people often become major parts of my trip.

I wonder what the frequent meetings mean in this case, in addition to giving us something to laugh about.

This morning when I went to the bathroom a mosquito caught my eye. It was in the toilet. I felt a dilemma. I didn’t want to sit down and have it sting me. but I wanted to use the toilet! I decided to flush the toilet and see if it would leave. It did. But did it come right back? I would have to take my chances.

Soon thereafter, there was a mosquito on the window screen of the main part of the studio. Was it the same one or a new one? To be determined. Maybe. This is a new experience but is one I will laugh about.

Probably the person that has caused me to laugh the most is a staff member named Pat. He is quite a jokester and to me is committed to seeing beauty and joy all around, and adding to it whenever possible.

Whether it is by wearing mismatched or playful socks or forwarding a file to my daughter and adding a note saying that I am behaving myself, he brings light into the world. And he always waves and calls me by name when I walk by his office.

My earliest memories of him happened on my first days here. The first thing I remember him saying is that at one time he had been a priest for 15 years. That certainly peaked my interest.

He came to see how I was doing for the first three days. The first time he asked me where I got my spiritual guidance and I gestured to a picture of Amma. “The hugger!” he exclaimed. (Amma is known for having given 39 million hugs. So far.) I was amazed that he even recognized her picture because it was a really old one. During that visit, a mother duck followed by seven ducklings walked by my window.

Since then when people visit me, if he knows that they are coming to see me, he asks them if they are huggers. If they look at him like he’s crazy then he asks if they’re devotees. Most are. This process has brought much needed laughter into my life.

I think there was one other thing I was going to write about but I don’t remember what it was. The mosquito incident drove everything else from my mind. I guess there will be a part three to this series at some point!

Amma is an internationally known humanitarian and spiritual leader. I met her in June of 1989 and have spent time with her every year since then. From time to time, I share Amma quotes on my blog. This is one of those times.

When going to bed recollect the day’s activities and try to discriminate between the good and bad.

Never be depressed seeing the obstacles on your path. You have the lamp of faith with you. Light it.

The attitude “I will only accept success” is wrong. Learn to also accept the responsibility of defeat.

If we look at the world with eyes of wisdom and give solace to the suffering through compassionate hands, we will surely reach the shore of peace and bliss.

Amma is an internationally known humanitarian and spiritual leader. I met her in June of 1989 and have spent time with her every year since then. (I was going to add except in 2020 but then I remembered I was with her in India in January 2020!) From time to time, I share Amma quotes on my blog. This is one of those times.

Traveling by bus, we see many things on the way and just let them pass by. Watch the thoughts of your minds in the same way.

Never forget God. Never forget your real Source. Never move away from the real center within you.

In times of tragedies, our duty is to lend a helping hand to those in grief and thus light lamps of kindness and compassion.

Grace is the factor that brings the right result to your actions, at the right time and in the right proportion.

Lessen the quantity of unnecessary thoughts and allow more space for the energy of love to flow within you.

When I was looking for something else on YouTube a few minutes ago, it occurred to me that a group video which had been made as a gift for Amma might be on it. And it was! The video was posted in August of 2020. Ten thousand participants from 360 cities and 39 countries were involved in making it.

I’ve seen quite a few Amma quotes recently that I have wanted to share. I decided I would put them all in one post!

Having the freedom to decide how to act, we should exercise the faculty of discrimination to choose the right actions and attitude.

Pray: Let the music of peace and harmony be heard everywhere.

It is pure love and selfless service that sustains this universe.

We must cultivate a spiritual culture that respects and worships the sanctity of all beings.

September 21 was the International Day of Peace. This was Amma’s message that day.

Let there be goodness, prosperity, health, happiness, peace, and abundance for everyone. May Mother Nature forgive our mistakes and bless us with a year in which there are no natural disasters. May everyone’s stomach be full and may everyone have a roof over his head. May there be peace on every corner of the earth. Let us sow good thoughts and reap good actions. Let us sow good actions and reap good habits. From good habits and behaviour, we can build a beautiful life. Through living a good life, we can rewrite our destiny. The strength, courage and goodness to overcome difficult situations is inherent within each of us. We need to awaken them. If we have a heart that doesn’t lose hope and a mind that’s always cheerful, we will be able to see newness and find happiness in everything. If we are able to be loving, friendly and content, there can be no greater cause for celebration. May all of you become messengers of love and peace in this world! May grace fill your lives with peace and happiness! – Amma

Consider everyone your kin. Then the attitude of wanting to uplift them will arise on its own accord.

There is no doubt in my mind that Amma has helped me the most in finding peace in uncertain times; by her presence, her teachings and the opportunities to apply those teachings, her music, her guidance when I have questions, the example she sets in living a life of service and the community of people I have in my life because of her.

As I am dealing with my own health problems, as well as living in the world during a pandemic, I am grateful for all the opportunities I’ve had to learn persistence, flexibility, letting go, being like a bird perched on a dry twig, and being in the moment. While my mind still goes into overdrive, most of the time I am able to find a centered place within me.

As I am writing this, I am remembering a prayer I wrote in the mid to late 90’s. It is still my prayer.

Not too long after the pandemic began and we were told to stay home, I started writing one of the 108 Names of Amma ten times in Devanagari (the script used to write Sanskrit words) each day. Many of the “names” relate to one of Amma‘s characteristics. The list was written by a devotee decades ago and is frequently used as a chant before meditation or singing.

If you notice differences between the transliteration and the Devanagari script know that more information about that is provided in my last Sanskrit writing post. 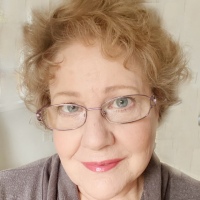