Digital copies of Sreejit’s four books are now available on Google Play. (Using that process, the books can be downloaded and then read on a computer.)

A modern tale, an ancient mysticism, a universal love. Overcome by the weight of his failure to live up to the world’s standards of success, Ballard Davies decides that there is only one solution. He gets in his car and drives. He drives away from everything and everyone that he knows, in an effort to just start over. He doesn’t care where he’s headed; he just wants another chance to get it right. What he finds is beyond his imagination, as he befriends an eccentric cast of characters. From the divinely inspired to the rationalistic blowhards, everyone becomes a part of his journey to begin again. But there is still one problem – he cannot escape himself. What will it take for Ballard to overcome his own self-imposed limitations and live the adventure he feels he deserves? This is the journey he now travels, down a path where truth, love, desperation, honor, the forgiving and the righteous, the mystics and the scientists all battle for the chance to be given the foremost spot in the realm of his mind. Will the pain of loneliness and separation prevail, or will Ballard find something to live for?

Traversing a world based on perspective, with the force of our own illusions propping us up, what would you forsake to know the truth? Two families, separated by continents, are wrapped up in the same timeless struggle – to be more than the sum of their parts. Join them as they seek to solve a mystery that goes beyond the limits of our physical reality. With time never on our side, the question arises: what would you give up for freedom?

The third novel in this intriguing and captivating series, Willow, will be available in the not too distant future.

The other two books Sreejit has placed on Google Play are collections of his poetry.

Out of the Fog: 30 poetic musings on the world to which I cling.

Perspective shapes our truth, our vision, and the way we move throughout this world. Our beliefs are filtered through the experiences that we’ve had and the weight that we allow these experiences to carry in the shaping of our truth. The world becomes illusion when we realize that every creature sees and understands it from different vantage points. Our world is all about perspective. The one written about here is mine.

Gypsy Soup: A Collection of Poetry 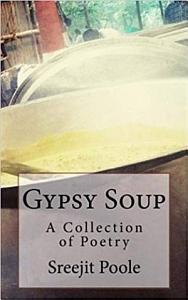 Gypsy Soup is a reflection of the frailty of human intention, as well as the power of the human spirit.

Consider checking them out at: https://play.google.com/store/search?q=sreejit%20poole&c=books

One thought on “Now Available on Google Play”