A few days ago, I saw a newspaper lying on a table. When I glanced at it, the article that caught my eye was announcing that the Chief Minister of Kerala (the chief executive of the state) requested that all Keralites living in or out of the state, donate a month’s salary to the relief effort. It was suggested that they donate three days a week of their salary at first and then pay the rest over a 10-month period.

What a difference it would make in the recovery effort if people did this. I wonder how many Keralites will be this generous or have enough income to be able to participate. I would guess that he will have more response than if the same request was made, after a tragedy, by any U.S. president or governor.

In researching this event today, I read this statement by the Chief Minister:

As you are aware, this is the worst calamity in the history of Kerala. This calamity has affected the entire stretch of Kerala and 12 out of 14 districts severely. The devastation and destruction are extremely severe and beyond a description. The loss of life, livelihood, homes, roads, bridges, agriculture, power lines and public infrastructure will have far-reaching impact on socioeconomic fronts. Though it was unprecedented, the government swung into action immediately and concentrated fully on rescue and relief. I need to underline the fact that all sections of the people held their hands together along with government agencies to conduct rescue and relief operations. The selfless efforts of the fisherfolks have to be specially underlined. Read more

I also learned that on August 26, the death toll was 302 with more bodies being discovered. There were 1435 relief camps still in operation and the population in those camps was 462,000.

I then looked for an update on Amma’s relief work. I found this statement on amritapuri.org.

As the flood waters recede, and as the spotlight wanes, Amma and MAM remain fully committed to helping the survivors with their recovery for as long as it takes. Next steps for the Math include focusing on disease prevention, ongoing treatment of injury and disease, and finding ways to re-house those who have lost everything. Read more 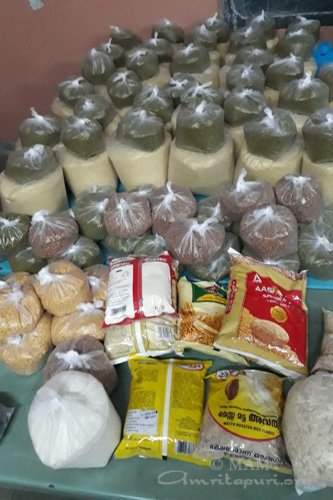 This year, Onam occurred on Saturday, August 26. Onam is a family holiday in Kerala, one that celebrates the agricultural harvest. Amma decided that the ashram event would not be celebratory in nature because of the devastation caused by the floods. The tug of wars and cultural entertainment that would normally be part of the festivities were pulled from the program.

Huge crowds usually come to the ashram for Onam. I wondered how many people would be able to attend this year. Even though there weren’t as many people as normal, it was still big. The program began with Amma’s satsang (spiritual talk). She spoke in Malayalam, but the English translation was put up on screens. I find I am much more attentive when the translation is done this way. There were so many parts of Amma’s talk that spoke to me. I haven’t found the text of the full satsang anywhere, but you can read some of it here.

(The photo below shows only half of the auditorium.)

After the satsang, Amma sang three songs and then gave darshan (hugs) for a short period of time. When darshan was over, it was time for lunch. Amma handed a plate to every person in the auditorium.

The Onam lunch was quite a feast. There were so many types of food on each plat. A lot of tables had been set up and brahmachinis and other helpers walked around aiding devotees in finding a place to sit, handing out hot water to drink and a buttermilk sauce to put on the rice, and cleaning up the tables in-between diners. The meal really felt like a family event to me. I realized, once again, that I have a VERY large family.

(Click on any of the galleries to enlarge the pictures.)

After the lunch, Amma fed Lakshmi, the ashram elephant, her lunch. This is always one of my favorite parts of Onam. After Lakshmi finished eating, Amma had her pick up, with her trunk, any food that had dropped on the floor. It always amazes me to see how well Lakshmi can clean up her mess.

Once the floor was clean, a bucket of water was brought to her. Lakshmi drunk quite a bit of it and then pulled up more water into her trunk. Next, she sprayed the water all over the children who were standing or sitting close to her. There were screams of delight and laughter from all over the auditorium, especially from everyone who was sprayed. That process occurred over and over. I think they even brought Lakshmi a second bucket of water.

When the water in the buckets was gone, the lunch program was over. Lakshmi was taken away and the devotees dispersed. 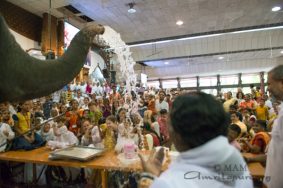 Amma came back to the hall at 6:30 p.m. for the evening bhajan (devotional singing) program. The songs were beautiful, as always.

Since there would be no entertainment that night, I expected bhajans to be the end of the Onam program. That was not Amma’s plan, however. Instead of going back to her room when she finished singing, Amma announced that she would be continuing to give darshan.

Amma gives and gives and then gives some more. I don’t know when she stopped for the night, but I know I went to bed before she did.

In my last post, I talked about making the decision to sit closer to the front of the room during programs instead sitting at the back or far sides of the hall. I have followed through on that commitment. Most often, I have been sitting on the floor in the section closest to Amma. I had forgotten what it is like to be surrounded by devotees who know the songs. The sound is so full and powerful.

I am still finding my limits though. I can sit cross-legged for an hour or even an hour-and-a-half. However, when I tried sitting in that way through Amma’s meditation and question and answer session, followed by the bhajan program, on Monday night, I found that my legs hurt a lot. Three-and-a-half hours was too much for me, even though there was a short break in the middle.

That night, Amma sang a lot of old bhajans, including one I hadn’t heard in many, many years. It was Shyam Radhe Shyam Radhe Shyam… Aarati Kunjavihari Ki Sri Giridhara Krishna Murari Ki. I was in heaven.

Sreejit cooks for the Western Canteen. One day last week was salad day. He made potato salad (potatoes, pickles) , 3 bean salad (pinto beans, chickpeas and green beans), and beet salad. Someone took a picture of him surrounded by the ingredients. I think it gives a good sense of the amount of food Sreejit prepares for lunch, six days a week, and for every dinner. Needless to say, I am very proud of him.