I continued attending the Ganesh bhajans in the Kalari from 9-10 each night. All in all, it was nine nights of pure bliss for me as we sang the rocking, high intensity songs. How I have yearned to return to the days when bhajans affected me that way. Two or three of those days, I even sat cross-legged on the floor for the whole time although I asked someone for a hand when I wanted to get up at the end. For one reason or another, I’ve needed to sit in chairs at programs for several years so was excited to see that I could once again be comfortable sitting in the middle of a bhajan group.

Then on Sunday, the big day arrived. It was Ganesh’s birthday, the culmination of the ten day celebration. At 3:30 in the afternoon, devoteese gathered near the Kalari for the procession. We put on orange headbands and placed sandlewood paste and red kum kum on our foreheads, slightly above the junction between our eyebrows. Once we did that, we were instructed to have a seat in the Kalari.

I sat down in a place that was near perfect. (The photo at the top of this post shows the view I had even though the photo was taken on a different day.) I knew I was in an ideal location for the singing that was to come prior to the procession. I was torn though, because I also knew that Lakshmi, the ashram elephant, was in front of the temple and soon I could hear the sound of the horns and drums that have been associated with Hindu festivals since antiquity coming from there as well. I didn’t want to miss anything. Then, to make it even harder to stay put, the sound of big drums being played began. I stayed where I was, choosing to have a slightly delayed gratification.

Before long, I could tell that the drums were coming our way. They got louder and louder. I was so excited. Simultaneously, the bhajans began. By now, most of the songs were familiar to me. I was in bliss. I don’t remember how many we sang but before long it was time to begin the procession.

The big and heavy statue was moved to a decorated cart. That was quite a feat. As soon as it was ready, two men got onto the cart behind it and some others began to pull the cart. The procession had begun.

After leaving the Kalari, we walked to the courtyard in front of the temple where Lakshmi and the two devotees who were riding her were waiting. 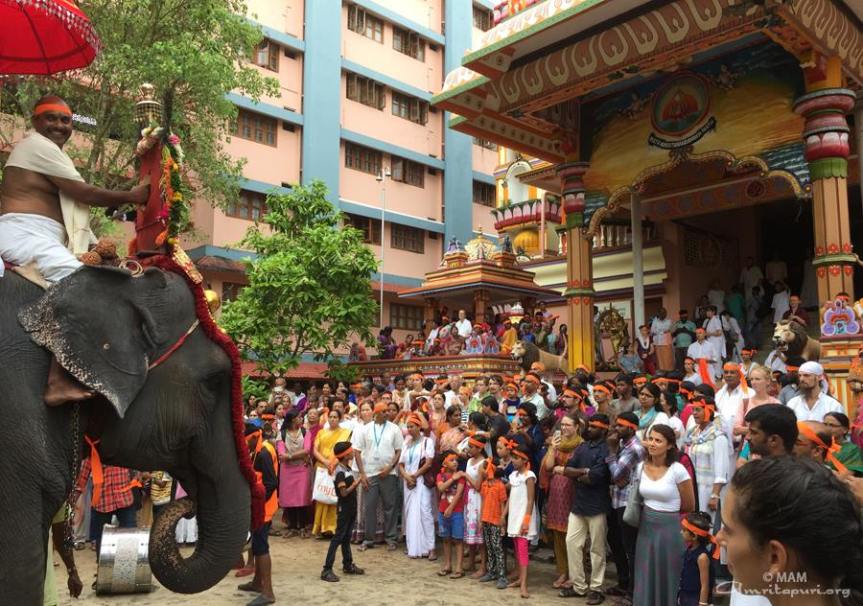 Lakshmi and musicians with ceremonial instruments lead the procession.

We wound our way towards the auditorium, where Amma was giving darshan, singing the whole time.

When I started the procession, I was walking with a friend who prefers to be on the outskirts of crowds. I soon realized that this experience was one of the main reasons I had come to Amritapuri this time, so I darted into the crowd and made my way to the front where I could be in the thick of things. As I reflect on it now, I find that interesting. I always want to be on an aisle seat on a plane or in a theater, because I don’t like getting hemmed in. But this was different. I wanted to experience every drop of what it was possible for me to experience.

Soon, Ganesh was in front of Amma.

After leaving the auditorium, we headed towards the beach. Normally that would be a five to ten minute walk but we walked slowly. People lined both sides of the streets and pathways, watching as we walked by. Every so often the procession would stop and the singing and dancing would intensify.

When we made it to the beach, Lakshmi and the musicians waited on the beach…

… while a smaller group of devotees took the Ganesh statue out onto a rock jetty. There he was dropped into the ocean so the clay he was made from could dissolve and his essence return to Mt. Kailash, his heavenly abode.

The crowd spread along the coast line to see the immersion as best they could. After Ganesh had been taken by the ocean waves, everyone dispersed and made their way back to the ashram. I felt happy and full.

Most of the photos in this post came from the Amritapuri Facebook page. Many photos were taken that day so I suspect there will be more available on amritapuri.org in the next few days. If that happens, I will provide links to them in future posts on my blog. 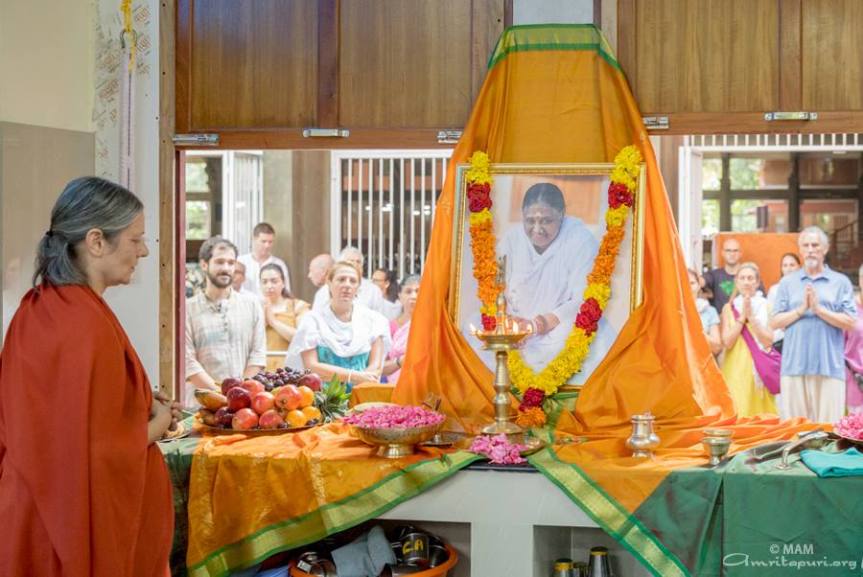 A puja was held at 7:30 a.m. on Thursday to bless the new cafe space prior to its opening. It was SOOOOO nice. Many people crowded into the café and others stood outside. A pujari performed many rituals, including chanting the 108 names of Amma, and a brahmachari led the group in singing four bhajans. I don’t remember the name of the first song but the others were Kali Durge; Amba Bhavani Sharade and Durge, Durge. Swamini Krishnamrita, who you can see in the photo above, did the Arati.

Afterwards, we went to the section of the new building where the canteen food is cooked. One of the stoves in that area was lit by the puja flame and we sang Om Namah Shivaya until a pot of milk boiled over. It took quite a while for that to happen so we sang for a long time. I enjoyed it so much.

Then, we returned to the café portion of the building and each devotee was given a small bowl of prasad that contained a chocolate chip cookie, a banana and keshari, an Indian sweet. The bowls were made from banana leaves.

The prasad bowl reminded me of a pada puja that the café staff did for Amma many years ago. Normally, during a pada puja, Amma is offered a plate that holds a variety of Indian foods. The café staff had done the pada puja their way though and had brought Amma items from the cafe such as a veggie-burger, French fries, pasta and pizza! I wasn’t in India when it happened, but I still laugh when I think about it. Everyone, including Amma, had thoroughly enjoyed the unusual experience.

One of the reasons I came to India in August this year was so that I could participate in three festivals. The first one, Ganesh’s birthday is an eleven day celebration.

Ganesh is son of Shiva and Parvati and is known for having the head of an elephant. He is the god that is worshipped as:

The celebration began with a puja at 5 a.m. on Friday, August 25. The pujari performed many rituals and the brahmacharis chanted numerous chants. It was beautiful although I have to admit I was too tired to enjoy it as much as I thought I would. Also, I had expected there would be a lot of singing but I was wrong, singing wasn’t part of this particular puja.

It was during this program that the Ganesh statue that had been made for this year’s celebration was installed. You might remember from a previous post that the statue had been created on the ashram grounds this year. At the time I wrote that post it looked like this:

This is what it looked like on Friday morning when it was installed:

At 8 a.m. on that day, I went to the auditorium for another another Ganesh event. This turned out to be the one I had remembered from the past. It was also a puja but the ashram elephant, Lakshmi, came for this one. We sang lots of songs and Lakshmi danced to the music. Afterwards, she was offered many plates of food. She definitely enjoyed that!

People are gathering at the Kalari, the site where Ganesh was installed, between 9 and 10 every evening during the 11 day celebration. I attended the first two gatherings and will continue to do so. We sing rousing Ganesh bhajans for most of the time and then a beautiful Arati and closing prayers. After the program is over, each person is given a luscious and tasty treat.

On September 3, the last day of the celebration, the statue will be taken to the beach in a public procession, singing as we go. It will be immersed in the Arabian Sea where the clay will dissolve so Ganesh can go back to his home at Mt. Kailash where he lives with Shiva and Parvati.

The season of Onam also began on August 25. Onam  is a harvest festival and is considered to be the biggest and most important festival in Kerala. September 4 will be a full day of festivities at the ashram, but each morning until then a new pookkalam will be be made outside of Amma’s house. The pookkalams are constructed using flower petals of various colors. Here are photos of the ones that were made for the first three days of this Onam season.

Photo Credits: All photos are from the Amritapuri Facebook Page

Last week was Ganesh Chaturthi, the yearly celebration of Lord Ganesh, the aspect of God that is the remover of obstacles. This beautiful statue of Ganesh was in Amma’s Amritapuri ashram during that time. Next year, I hope to be in Amritapuri during Ganesh Chaturthi! 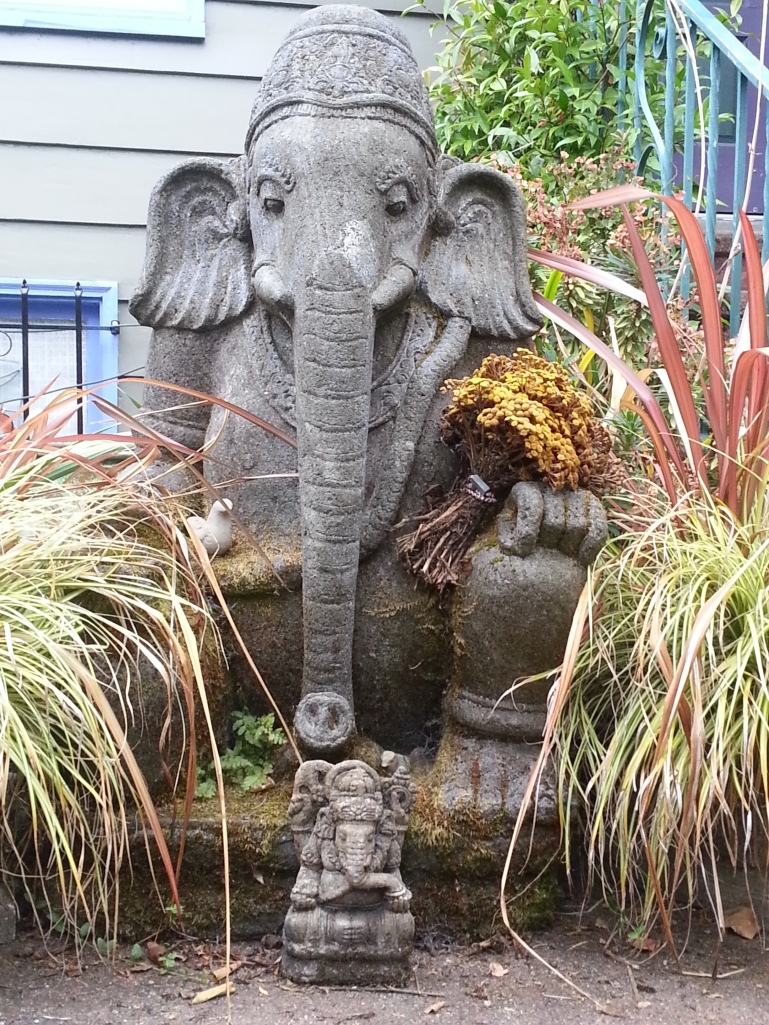