Today I decided I would make breakfast with vegetables from my garden.  The garden is small and some of the vegetables are already getting sparse, but I was able to include beets, two kinds of carrots, spinach, chard, yellow squash, a squash blosssom, a potato and basil. I realized later that I forgot to include a zucchini and I chose not to use my last bok choy plant.

I was particularly excited about the beet because I’ve never had any luck growing them.  But today the one I pulled out was BIG, at least in comparison to any I’ve had in my garden in the past.

I decided I would steam them with a bit of dill. They tasted uttamam! (Uttamam means “very good” in Sanskrit.) 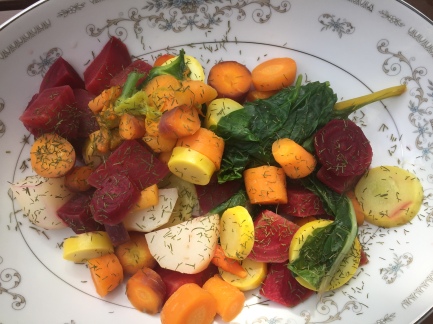 Later, I realized that I could have cooked some of the beet greens, but I know the worms in my two worm bins will thoroughly enjoy eating all of the scraps.  It seems fitting since they deserve a lot of the credit for the harvest.

I am still very much a beginning gardener.  I love how much I learn each year