I stayed with friends in Woodinville during the six weeks when my balance and dizziness problems were at their worst. Other friends who lived nearby brought meals for me. (Now that I’m back in my Seattle home, one friend is staying with me, and my neighbors are bringing me dinners so that I can have some transition time.) It is wonderful to have the support of so many people.

There are deer in the place I stayed in Woodinville. After I had been there for awhile, I started walking between the house and the front gate. At first, I only made it a third of the way to the gate. On the day before I left, I walked the “round trip” four times in the morning and 2 or 3 times in the evening! And I had cut my time down from 10 minutes per round to 6 minutes.

One day when I was walking, I spotted a deer.

When she saw me, she came closer. She would peek out at me in-between the trees that lined the road. Usually by the time I could get my phone ready to take a photo, she would be looking a different direction. Then she would dart away, only to show up a bit down the road. It felt like a game of peekaboo.

I cropped the photo above two times.

Once the doe reached the part of the road between the front gate and the house where there is no fencing, she ran away. I didn’t see her again that day. But what fun it had been… hopefully for both of us.

My friend Kathie posted quite a variety of inspirational pieces on May 6. The two poems I’d read before but it was good to read them again. I was particularly moved by the last video, which was completely new to me. (You will have to click on view original post in order to see the last one.)

Here’s a new collection for you, of feel good, feel deeply, and feel connected things to watch, read and listen to!!!

And if that didn’t delight you and make you laugh, just look up almost anything by Jeanne Roberston…

And I keep this on in the back ground sometimes or check it out all day long. These baby eagles are hysterical to watch at this age. What a miracle it is that we even can.

Or this one is amazing also!

If you need to get up and move, watch this standing. You’ll be bopping around before you know it!

To connect with deeper meaning and the bigger picture, read this lovely contribution

And the people stayed home. And read books, and listened, and rested, and exercised, and made…

When I went to my blog’s stats page yesterday, I noticed that six people had read a post I had written in July of 2015. How had they found it? The “referrers” and “search engine terms” sections of the stats page didn’t give me a clue.

It was interesting for me to read the post again. In the last two weeks there have been many stories on the news about the run on toilet paper. Since then, the store shelves where the toilet paper once resided have been empty every time I’ve been to the grocery store. Some stores are putting a limit on how much toilet paper people can buy as a way to prevent the hoarding.

I’m thankful that I had bought some toilet paper just before the run on it began. I’m even more thankful for the 30+ years I’ve been going to India. Especially in the early years, there was generally no toilet paper available. I know I would survive even if I had to live without it.

It seems a fitting time for me to repost this 2015 article.

When I went to the supermarket yesterday, these displays caught my eye.

The three displays were next to each other and all were devoted to the sale of toilet paper!

A few minutes later I found another display directly across from the check out counter:

Yes, it was more toilet paper!  I wonder if any other country in the world would devote this much supermarket space to toilet paper.  I doubt it.

This morning, I decided to go back to the store and take a look at the packaging.  I thought it might be interesting to read the advertising comments and it was! These words and phrases were used:

I have to wonder how toilet paper can have clean stretch or long lasting value!

I wish I had counted how many different types of toilet paper there were.  I know one company made three or four types, on a scale from Basic to Ultra!

I don’t know what kind of summary statement to make about this post.  I think I will let the information speak for itself and look forward to hearing your reactions.  Does toilet paper receive this much attention where you live?

My daughter sent me a quote a few days ago that made me laugh, but it also made me think. I have found it helpful and so have some of the people to whom I have sent it. I tried to track down the author but have been unsuccessful in that endeavor.

I’ve also noticed that the quote comes in several forms. I have decided to share it even though I don’t know who wrote it…. because of the importance of the message. I am using the form that I was sent and that I like the best.

Your grandparents were called to war.

You’re being called to sit on your couch.

You can do this.

As I age, I find myself drawn to older people who can serve as role models in the aging process. I met a woman in Amritapuri whom I think of in that way. She lives a life of adventure even though she is well into her 70’s. The woman in this video is a very different kind of role model. I don’t see myself following in her footsteps, but I thoroughly enjoyed the video. I hope you do too.

A friend just told me about this video. I thought it was hilarious.

When I picked this title, I wanted something that would grab Al (my ex-husband)’s attention  and the attention of everyone who knows him. I think the content will also be of interest to others who read my blog.

The Seattle arm of the Pacific Northwest project kept the cigarette butt focus even after our “job” with the county was over. Cigarette butts are way more toxic than you might think. They are NOT made of cotton, they are made of cellulose acetate tow, which is a form of plastic, and they can take decades to degrade. Investigators in a San Diego State University study once discovered that if you put fathead minnows and top smelt in a liter of water that also contains a single cigarette butt, half of the fish will die.

Al has been part of the Litter Project since it began. In the early days, he and I would meet near his International District apartment and pick up litter on weekends. He would also participate in the bigger work parties.

In the early days, our group counted the butts, but we stopped doing that when we started sending them to TerraCycle. TerraCycle uses a formula based on weight to determine the numbers of butts we sent them. In the first photo below, Al and I were counting the butts at the end of a work party. 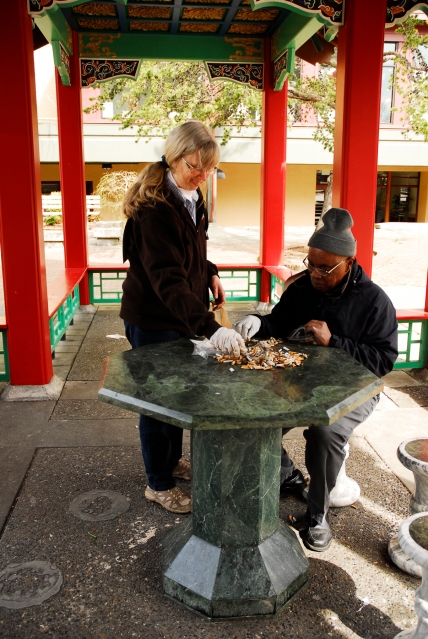 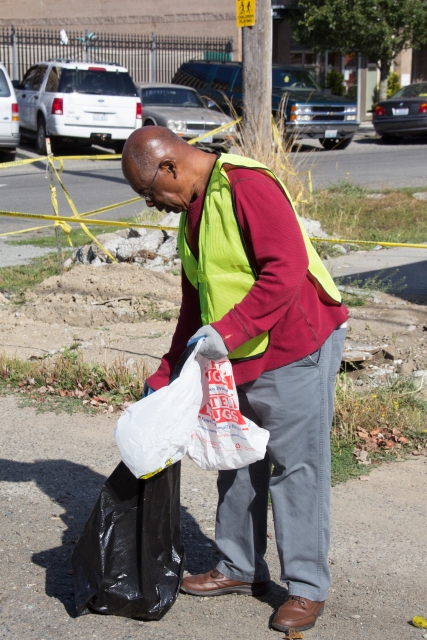 Al is also known for feeding the birds in his neighborhood, including the crows. That brings me to the reason for writing this post. I saw this intriguing video the other day and thought this kind of crow training might be a natural fit as a volunteer job for you Al. 😉

These crows were picking up both litter and cigarette butts. A longer version of the video commented that people shouldn’t try it on their own, the crows should be trained by an experienced trainer. So maybe it isn’t your job of the future Al, but it is an intriguing idea!

(In writing this, I wondered if holding the butts in their beaks could harm the crows. I hope not.)

Sreejit’s Friday reflections are getting more profound every week. This is my favorite of them all.

I’ve watched more videos than normal lately- ones that weren’t political for a change. I decided to share three of them with you.

Awe-Inspiring– wish I had seen this one 40+ years ago!

Fun- This video was Seattle Police Department’s response to a lip sync challenge from officers in Virginia.

Beautiful: A friend sent me this one earlier today. 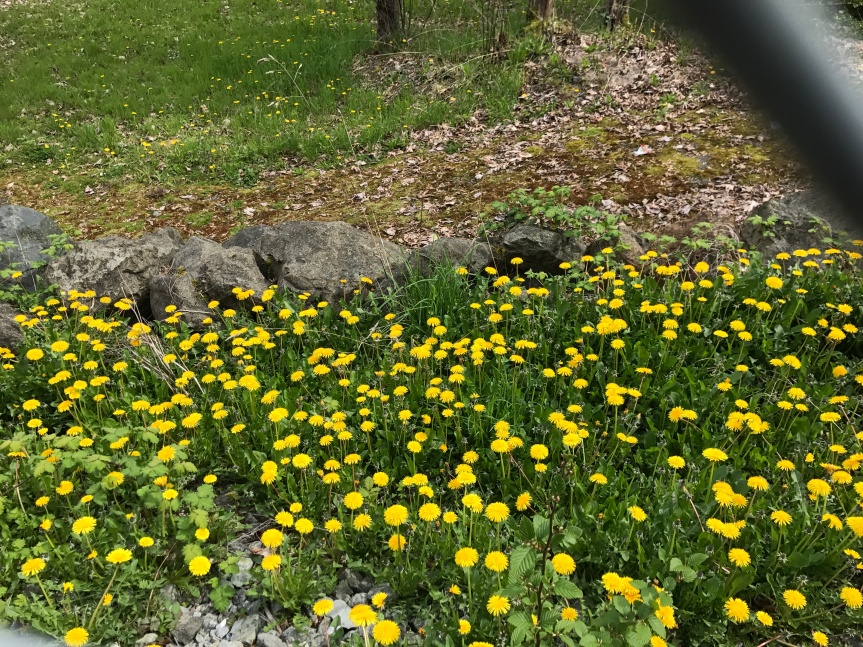 I laughed when I saw that today’s Daily Prompt is Chuckles. I also thought of the old saying “One man’s trash is another man’s treasure.” That is exactly how I feel about dandelions this time of year.

Two days ago, I saw this strip of dandelions near my home. It was at least 50 feet long and maybe more. Throughout the winter, I have been going to the grocery store to pick up lettuce that is going to be discarded. I feed it to the worms in my vermicomposting bins. The worms seem to be losing their enthusiasm for the lettuce, but they love the fresh dandelion greens.

The problem with the dandelions in this field is that it is part of light rail property and is completely fenced in. I have no way to access it, so I have to be satisfied with using the dandelions in my yard and the few that are on the street side of the fence.

Even though I know that it is important for me to focus on what I have, rather than what I don’t have, I have no doubt that I will still look longingly at the treasure that is beyond my grasp whenever I pass this field.